Jane may have been marginalized by the cultural canon, but her contemporaries considered her “one of the finest modern writers” (John Ashberry), “the most important writer of prose fiction” (Tennessee Williams), and further, a “genius imp, [a] laughing, hilarious, tortured elf” (Truman Capote). Jane drank more than she wrote, worried more than she worked, and had more epically disastrous love affairs than completed books. By almost any measure, Jane led a fascinating life filled with literary giants and great adventure and I want to bring her story to life.

“Although unknown to the general public, the Bowleses were famous among those who were famous.” – Gore Vidal

“My only complaint against Mrs. Bowles is that she publishes so infrequently. One would prefer larger quantities of her strange wit, thorny insight. Certainly she is one of the really original pure stylists.” – Truman Capote 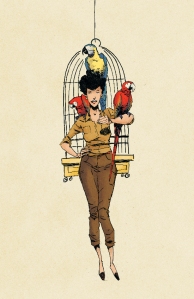 This Kickstarter is going to help fund the creation and publication of chapter one of an original graphic novel written by me, Katy Rex, about Jane’s life. This book will be published as a standalone issue and follow Jane’s life from childhood up until a freak accident on a horse that led her to be diagnosed with tuberculosis of the knee. It includes art from Tyler Jenkins (Peter Panzerfaust, Neverboy) on the main biography, and June Vigants on the short story, in full color with a stunning and evocative palette from Kelly Fitzpatrick (Sensation Comics). EditorKirsten Thompson contributes a unique perspective on history and feminism. It will also include Jane’s short story, A Stick Of Green Candy, about the nature of love and childhood innocence and the death of imagination. An inset medical diagram art piece from artist Kate Lacour will detail the intricacies of joint tuberculosis. This campaign will allow the project to continue and build into a full length book, and will be an opportunity for backers to get the exclusive rewards that will not be available once the book is fully produced. This single extra thick issue, coming in at a full 28 printed pages, will also feature an essay from Lauren Spohrer, editor of the online magazine Two Serious Ladies, which publishes original poetry and prose from women around the world.

Chapter one is completely scripted and the art is nearly complete. Help us get it printed, and YOU (yes, you!) can be eligible for a number of exciting rewards, including:

• Digital and physical copies before they’re available anywhere else

• A mini-comic written & (poorly) drawn by Katy: cocktail recipes of the artistic elite

• Options for original art from the creative team, including pages from the book and full color commissions

One of the cool things about working with a creative team of this scale is that we are able to collect work from each one of the short story artists in a unique set of 10 postcards. Each postcard comes from a place where Jane lived and worked at the time of the chapter in which that artist’s short story is featured.

This book is fun to read, beautiful to look at, and covers a crucial topic in the marginalized history of LGBT artists. Thank you for considering pledging!

Katy Rex (writer) is the founder of End of the Universe Comics, a website for both comic creators and those who study comics as an academic topic. She has a degree in English Literature from Towson University with a focus on graphic literature. Her thesis was written on apocalyptic narratives in Channel Zero and Y: The Last Man. She has written articles for several review websites, including Bloody Disgusting and Comics Bulletin, and she writes academic papers about comics for pop culture conferences, most recently in Rhode Island (NEPCA, November 2014), where she presented about ocular mutilation and gender roles in Kelly Sue DeConnick’s Pretty Deadly, and Chicago (PCA/ACA, April 2014), where she presented about the physical and visual representation of female characters in superhero comics. She lives in Minneapolis, Minnesota.

Tyler Jenkins (artist) does the art for the critically-acclaimed new series Neverboy(Dark Horse). He is the co-creator and artist on the fan favorite series Peter Panzerfaust, writer and artist on “The Chaining” (Dark Horse Presents anthology), artist on “The Last Best Day” (In the Dark anthology, Small Behemoth Press, IDW) and co-creator and artist on Snow Angel (Arcana). Tyler lives in the rolling farmland of rural Alberta, Canada. His personal interests include raising awesome kids, playing guitar poorly, reading and writing. His interest in Jane Bowles stems from her identity as a rebel, a figure who (either despite or because of society) was able to become a great writer, a great reflector of society.

Marguerite Sauvage (artist, cover) is a professional illustrator who has worked for brands including Louis Vuitton, LVMH, L’Oréal, Sony PlayStation, Apple, Marshall Fields, and Motorola. She has recently made a huge splash as a cover artist in the comic industry, providing covers for titles including Ms. Marvel, Thor, Ninjak, and The Wicked + The Divine. She is the primary artist for the digital DC Bombshells series written by Marguerite Bennett. Originally from France, Marguerite currently lives in Montreal, Quebec.

Taylor Esposito (letterer, designer) is a comic book lettering professional and owner of Ghost Glyph Studios. As a staff letterer at DC, he lettered titles such as Red Hood and The Outlaws, Constantine, Bodies, The New 52: Future’s End, and New Suicide Squad. Prior to this, Taylor was credited on numerous titles for Marvel as a production artist. He is currently working on a new batch of creator-owned titles, such as Gamer Girl and Vixen, Bayani, and Interceptor (Heavy Metal Comics). Other publishers he has worked with include Rosy Press, Zenescope, and Double Take. Taylor lives and works in Kearny, New Jersey.

Kelly Fitzpatrick (colorist) has worked on titles including Peter Panzerfaust, Neverboy, and Sensation Comics. She has been nominated for Best Colorist in the 2015 Ghastly Awards and recognized by Comicbook.com for the 10 Best Colorists of 2014. She is based in Portland, Oregon.

Kirsten Thompson (editor) is a writer and editor who regularly contributes to a variety of sites on issues relating to feminism, the LGBTQ community, linguistics, and pop culture. Her comic book editorial credits include The End Is Totally Nigh and The Bargain. She lives in Silverdale, Washington.

Adam Gorham (artist) has worked on a number of titles including Zero and Kill Shakespeare. He is adapting the short story Andrew. He lives in Mississauga, Ontario.
Anne Maxson (artist) is working on the short story Going to Massachusetts. Her popular pinup work is available through Indigoats. She lives in Pittsburgh, Pennsylvania.
Beatrice Penco Sechi (artist) is a professional illustrator and creator of the popular French graphic novel Lady Doll. Her art will adapt the short story Everything Is Nice. Beatrice lives in Cagliari, Italy.
Betsy Peterschmidt (artist) is working on Jane’s short story Camp Cataract. Betsy has achieved a broad fan base and critical acclaim with her online series Boys with Wings. She currently lives in Brooklyn, New York.
Dom Sole (artist) is providing the art for the short story A Day In The Open. Establishing a promising career with a debut in Strange Wit, Dom is based out of New York City.
Inés Estrada (artist), also known as Inechi and Gatosaurio, is known for her work inOjitos Borrosos, Lapsos, and her editorial work on Vice in Mexico City. Her art will adapt the short story A Guatemalan Idyll. She lives and works in Mexico City.
Joshua Hixson (artist) is adapting the short story A Quarreling Pair. His background includes the series Rebel Gun, and in addition to Strange Wit, he is working on an unannounced Image series. He lives in Wantagh, New York.
June Vigants (artist) is providing the art for the short story A Stick Of Green Candy. Having previously worked on Chainmail Bikini and Tales of the Night Watchman, they currently live in Los Angeles, California.
Kate Lacour (artist) has done surreal medical illustration in her print series, Bodies, and is responsible for having diagrammed Jane’s accident and diagnosis of tuberculosis of the knee. Also known for her book, Milk Teeth, Kate lives in New Orleans, Louisiana.
Ryan Kelly (artist) is well known for his work on DMZ, Local, and Lucifer. His art will adapt the short story Plain Pleasures. He and his family live in St. Paul, Minnesota.
Sean Von Gorman (artist) is adapting the short story The Iron Table. His work on Toe Tag Riot and Pawn Shop have earned him critical and fan acclaim. He currently lives in Brooklyn, New York.